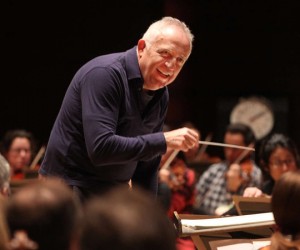 Bramwell Tovey in rehearsal with the Philadelphia Orchestra

"Conductor/composer Bramwell Tovey doesn't recoil with horror from just anything.

The Philadelphia Orchestra's urbane guest conductor for the next two weeks has seen much in life. He grew up in the Salvation Army in his native London, has regularly faced potentially distracted audiences at the Hollywood Bowl, braved the red carpet at the Grammy Awards, and guest-conducted all the Big Five orchestras in the span of one fabulous month last summer.

The British-born, Vancouver-based Tovey might be called America's unofficial principal guest conductor, happy to go where needed, whether leading Beethoven's Symphony No. 9 at the Mann Center last summer, making his subscription debut with the orchestra this week, or directing its "Glorious Sounds of Christmas" concerts Dec. 18-20 at the Kimmel Center.

But if you bring up ambition - that perhaps he some day might receive a knighthood (as did his old classmate Simon Rattle) - he looks at you as if you've sprouted devil horns: "Oh God, no! I think that would be too embarrassing for words!"...