Back to List
In the spotlight...
BBC America names Bramwell Tovey "British Expat of the Month"
Tweet 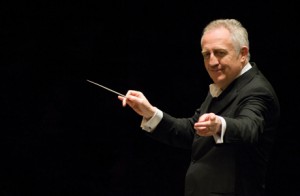 In the world of classical music, it’s rather unusual for the conductor to have a friendly fireside chat with the audience before the concert begins, but for British conductor, composer and pianist Bramwell Tovey, making a connection with the hundreds or thousands of people out there seems to be an important part of his job.

As the reviews for his recent concerts conducting the L.A. Philharmonic point out, he not only keeps up a flow of information about the works, but also a stream of witty — and sometimes awful — jokes, usually at the expense of himself or the British in general: “Strangely, talking to the audience is something that I hardly ever did in the U.K. When I arrived at my first North American orchestra in Winnipeg, Canada, I was asked to speak and just spoke to the audience in the same way I’d address house guests who’d come to dinner. But it’s very important not to appear pompous or superior — standing on that wooden box can give you an exalted sense of self if you’re not careful.”

At work, rehearsal times are also something different. In the U.K. there is often only one rehearsal of three hours, while in the U.S. there are four or five rehearsals of 2½ hours duration for every program — something he feels that helps a conductor “take greater risks in performance and go a little deeper.” Finally, he says that standing ovations are a much more common occurrence in the U.S. than the U.K.

Though currently based in Vancouver, Canada — where he has been Music Director of the Vancouver Symphony since 2000 — he regularly criss-crosses the continent for the New York Philharmonic, the Los Angeles Philharmonic, the Philadelphia and Cleveland Orchestras and the Boston Symphony...